A quantitative study on the future of employment has some interesting findings. Somewhat shocking to those who kept their head in the sand.

According to our estimates around 47 percent of total US employment is in the high risk category. We refer to these as jobs at risk – i.e. jobs we expect could be automated relatively soon, perhaps over the next decade or two.

Our model predicts that most workers in transportation and logistics occupations, together with the bulk of office and administrative support workers, and labour in production occupations, are at risk. These findings are consistent with recent technological developments documented in the literature. More surprisingly, we find that a substantial share of employment in service occupations, where most US job growth has occurred over the past decades (Autor and Dorn, 2013), are highly susceptible to computerisation. Additional support for this finding is provided by the recent growth in the market for service robots (MGI, 2013) and the gradually diminishment of the comparative advantage of human labour in tasks involving mobility and dexterity (Robotics-VO, 2013).

Our findings thus imply that as technology races ahead, low-skill workers will reallocate to tasks that are non-susceptible to computerisation – i.e., tasks requiring creative and social intelligence. For workers to win the race, however, they will have to acquire creative and social skills.

Same is likely to apply for jobs in the EU.  In my opinion the best we can do is set up an unconditional basic income for all. And work on proof of humanness, a turing test that is extremely hard to break. 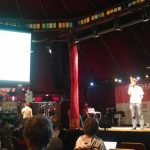