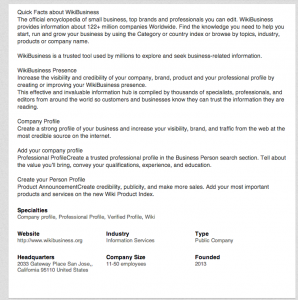 I was contacted November 2013 by Rasmus Refer. “Wikibusiness“, that sounds like a great idea. I spent a lot of hours working on the project, sent an invoice on the 31st of December 2013 for the many hours I worked on this project in December. I even continued working in January. I kept on inquiring about when I was going to be paid over Skype, now it’s more than half a year later and I’m still waiting for my money. Meanwhile I’ve been kept busy with vague responses with a lot of “next week”s and “next month”s…

Michael Heiberg, the founder and CEO, wrote to me in January 2014 that he “will get [my] payment arranged shortly”.

It’s all very unfortunate, since I think the basic idea is very promising.

In February 2015 – I was contacted by Torben Bartels, the new CFO recently. Still no resolution though.

2 thoughts on “When am I getting paid for my work on Wikibusiness?”