Back in December, after another encounter with Wikipedia’s deletionism I decided to get down, write a script and revive deletionpedia.org. Meanwhile there are over 5000 articles. 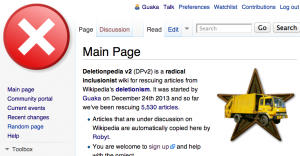 I got some complaints from people who wanted an article about them removed, which I handled as quickly as I could of course. Then  around noon today I received this:

Bonjour, how could we imagine a French language Deletionpedia?

Fortunately, from the start I had in mind to also run my script on Wikipedias in other languages. I’ll try to get back to this in the coming months.

Then a couple of hours laters this reached my inbox:

Thank you for Deletionpedia. I’ve been an engineer for over 30 years, and tried to start a few entries on airship companies of the 70s thru the present. I was met with intense resistance, all contributions were met with hyper-editing, and I was finally banned for repealing their edits and editing their pages to correct blatant errors. Like you, I’ve come away less than happy. However, I’ve started my own source of information at http://www.airship.guru – and I would be happy to promote your efforts there. Many thanks again for Deletionpedia!

My request to quote were positively answered. It appeared he even wrote Helium Hokum: Why Airships Will Never Be Part of Our Transportation Infrastructure for the Scientific American Blogs. Oh my. I think Wikipedia needs to get their stuff together. Soon. This guy does sounds quite knowledgeable and far from unreasonable. These people should be welcomed to Wikipedia instead of kicked out.

Feel free to contact me with more complaints so we can gather them – ideally something I can directly paste into my blog. And hopefully things will somehow improve over time – although I don’t even feel like jumping in there. 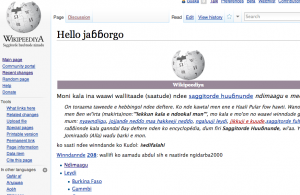 And while editing this post I’m getting a lot of 404s from Wikipedia. Haven’t seen that in a long time.

I have some more happy, positive news from Mali though, MALeBOOKS managed to reach their goal.

1 thought on “Deletionpedia is here to stay”